Narrative:
This was my first time using the Drop Troopers! It was a blast and I enjoyed using them as an alternative to the Lucky 7th.

This was an incredibly close game, and was filled with back and forth moments. After the 2nd turn when the Panzeraffe went down, I thought the SWD had lost for sure, but they made a surprising comeback! 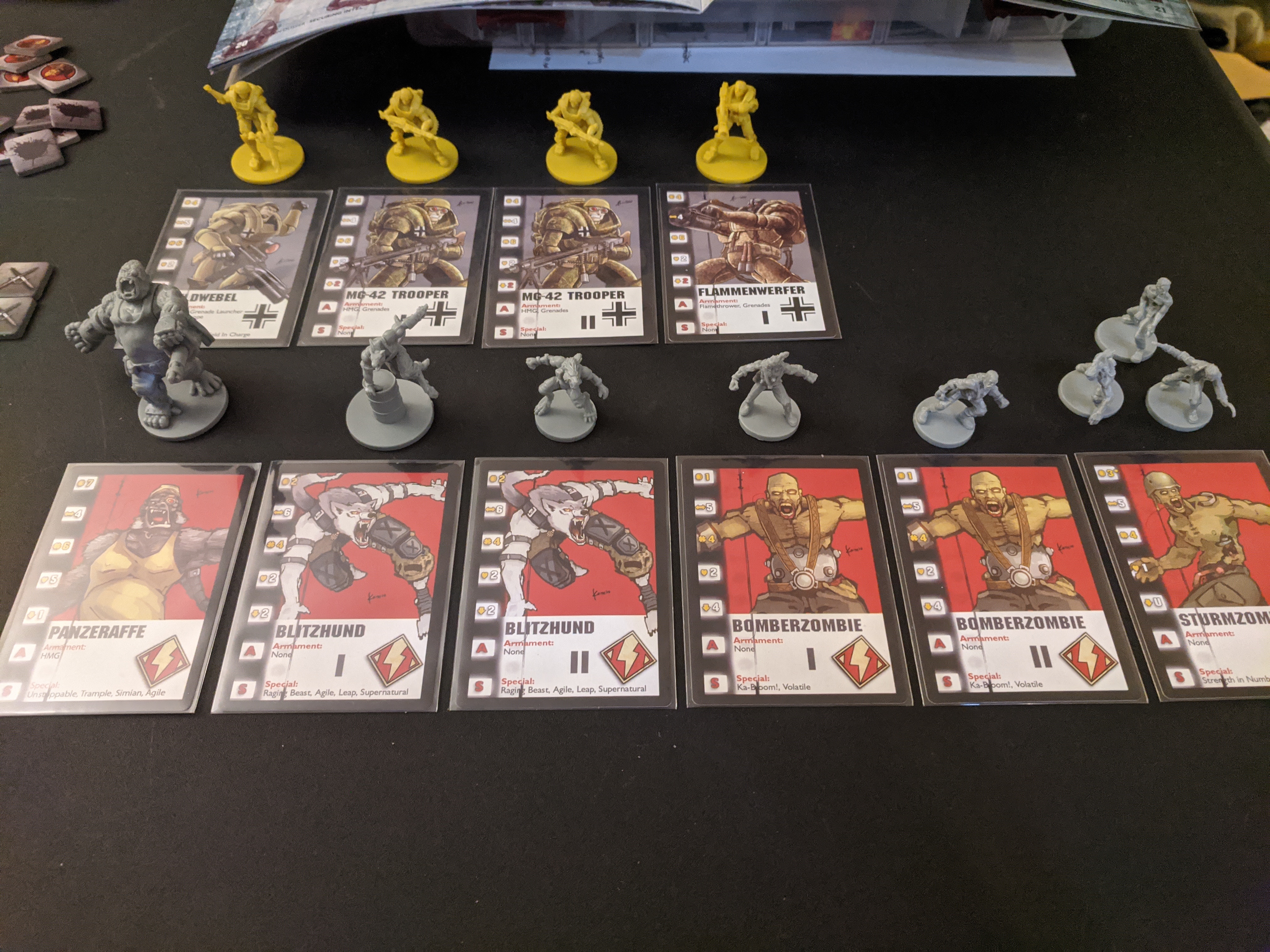 After turn bidding, both MG-42 Troopers dropped into the room adjacent to the SWD spawn. Their plan was to cut off the reinforcements, and to secure the primary central corridor that leads straight to the sub pen.

In the previous turn, the SWD player cleverly positioned a Bomberzombie in the center of the room, hoping to wound both troopers: 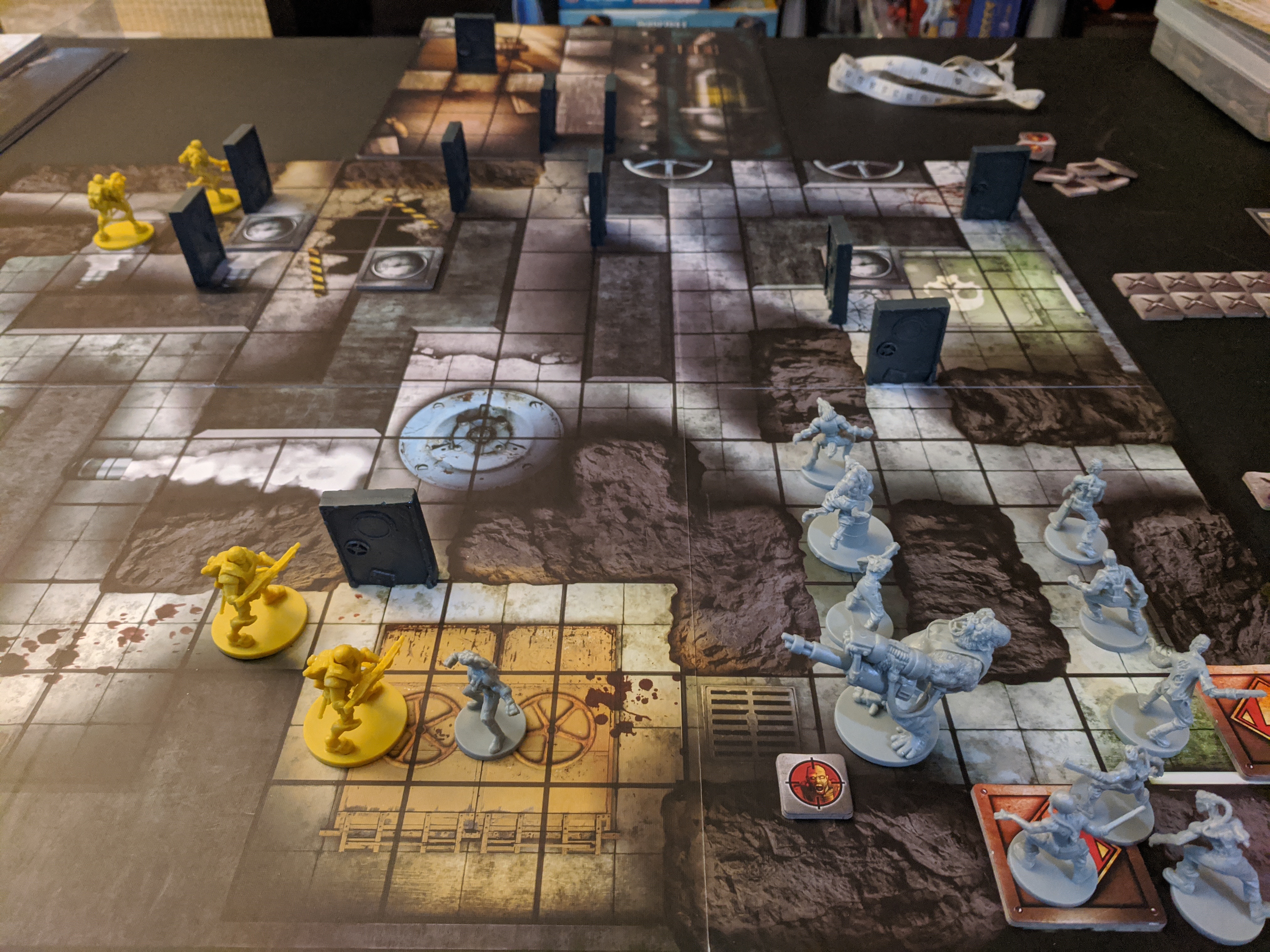 The first MG-42 trooper backed away from the Bomberzombie and exchanged brief gunfire with the looming Panzeraffe. 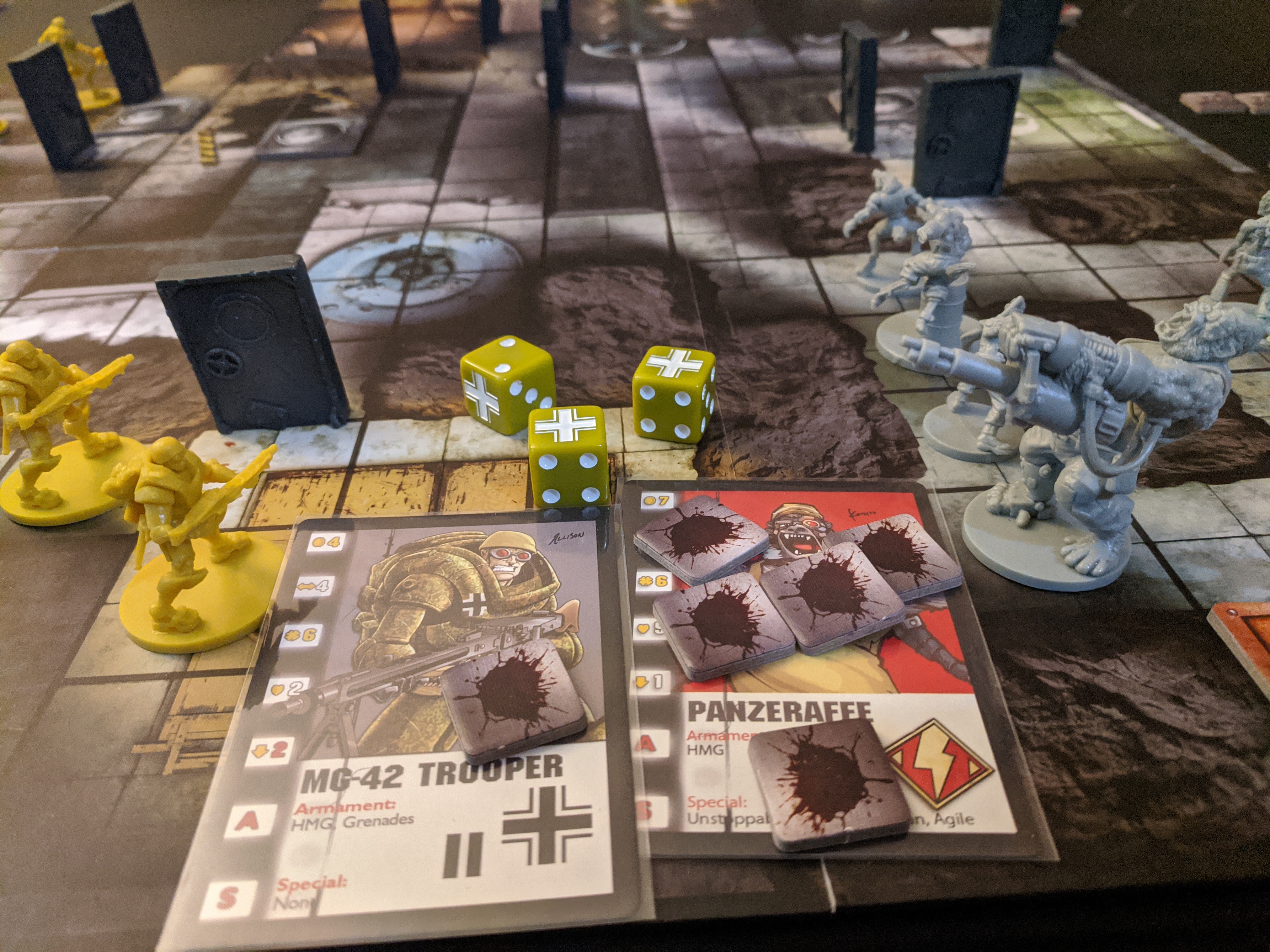 The celebration was cut short, however, as the forward Blitzhund darted up to the exposed Feldwebel and ripped him in half: 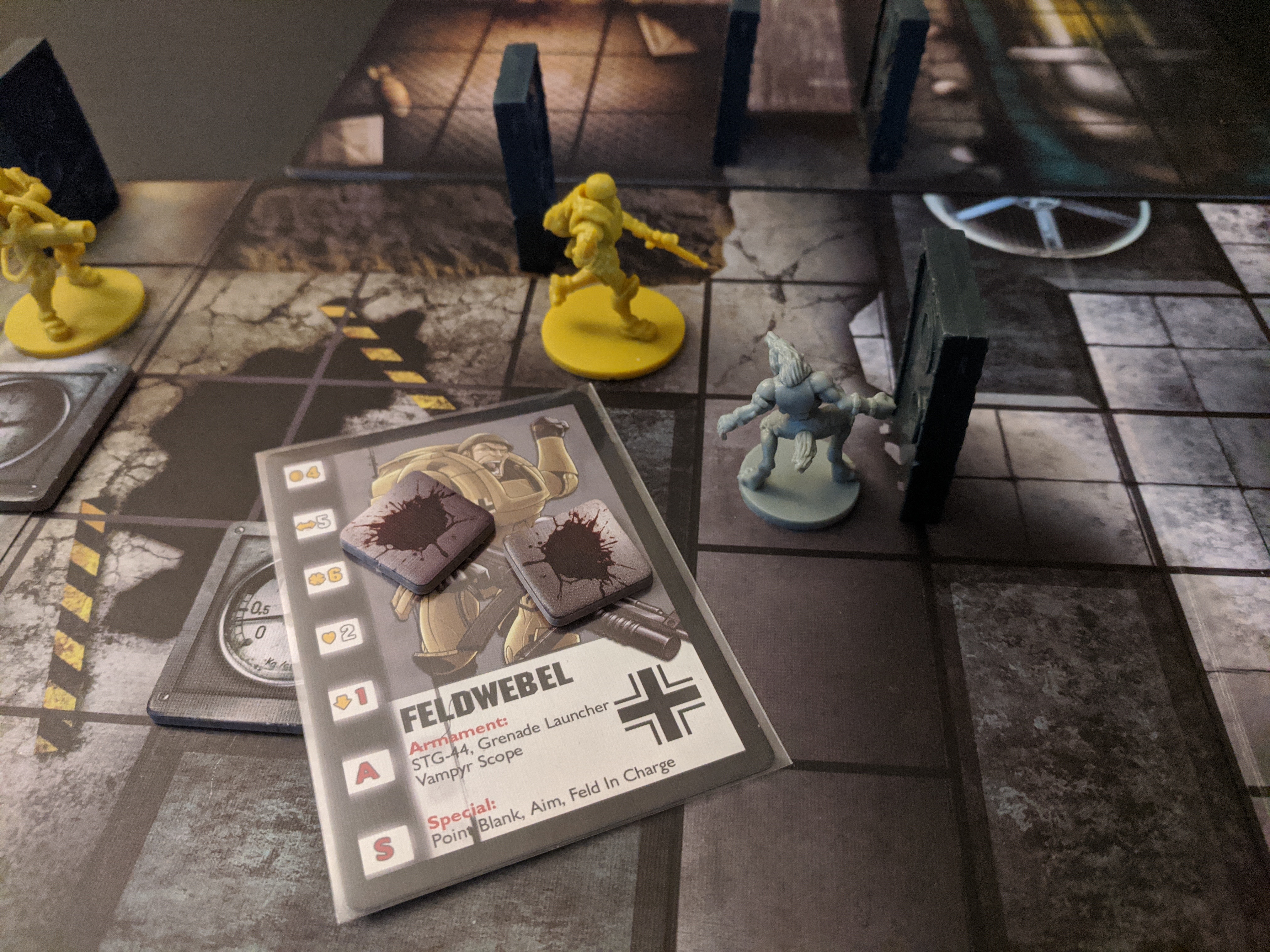 The Drop Troopers quickly retaliated. An MG-42 trooper moved into the central corridor and gunned down the Blitzhund in a hail of bullets: 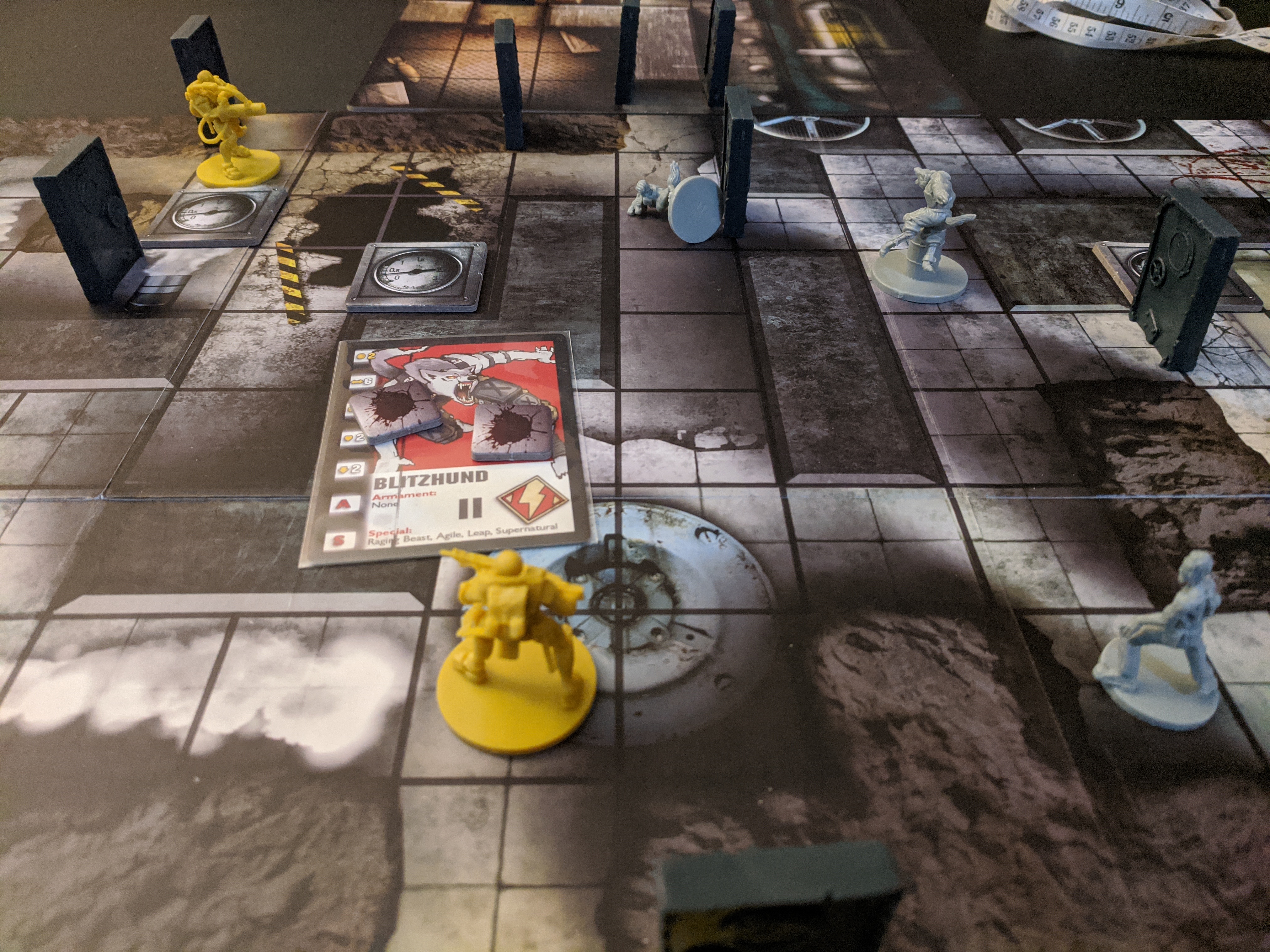 Then suddenly, the other MG-42 trooper was killed by a booby trap! 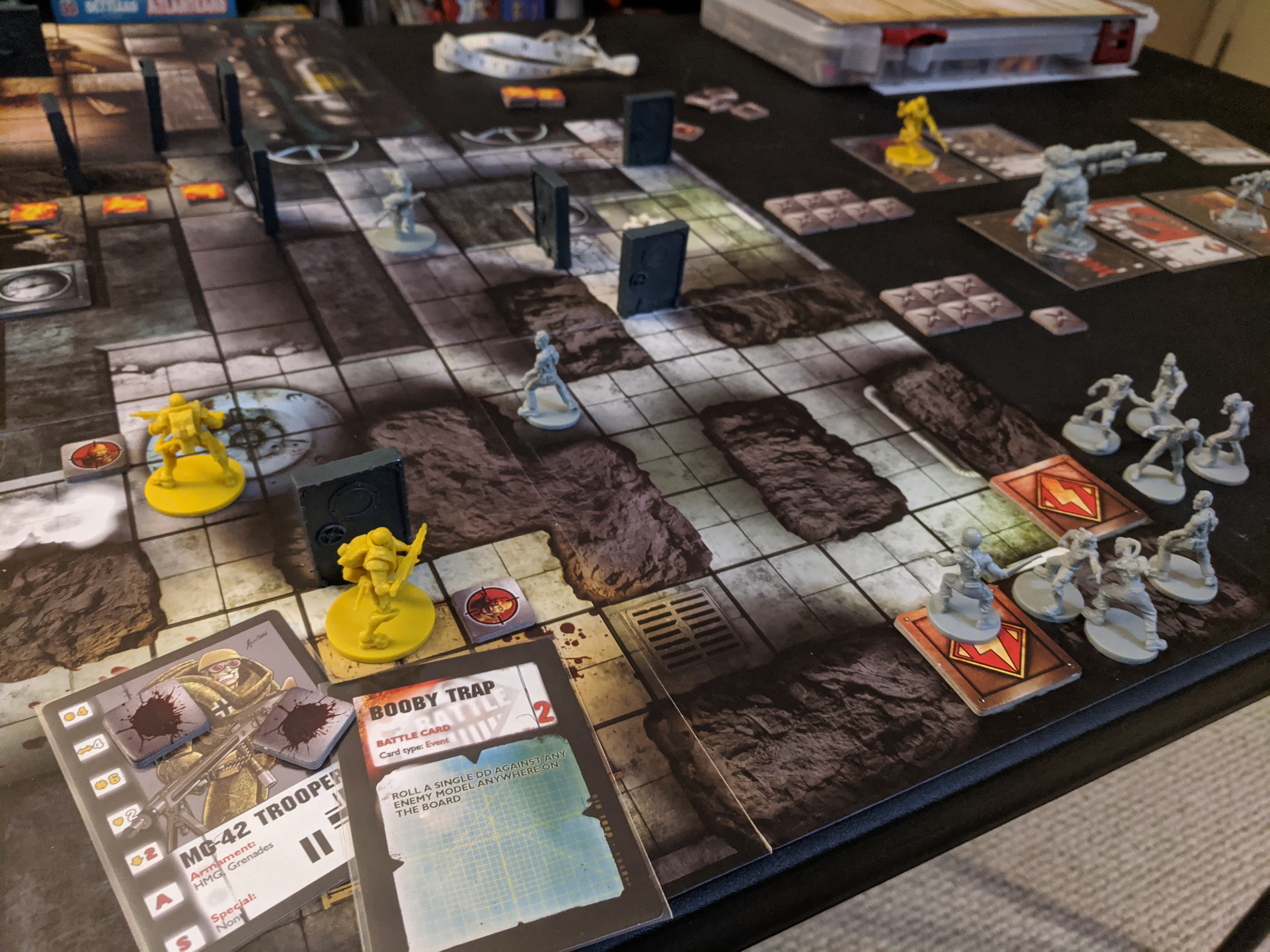 This left the MG-42 trooper guarding the central corridor exposed! A Sturmzombie quickly charged up and attacked him from behind. This took the trooper out of reaction fire: 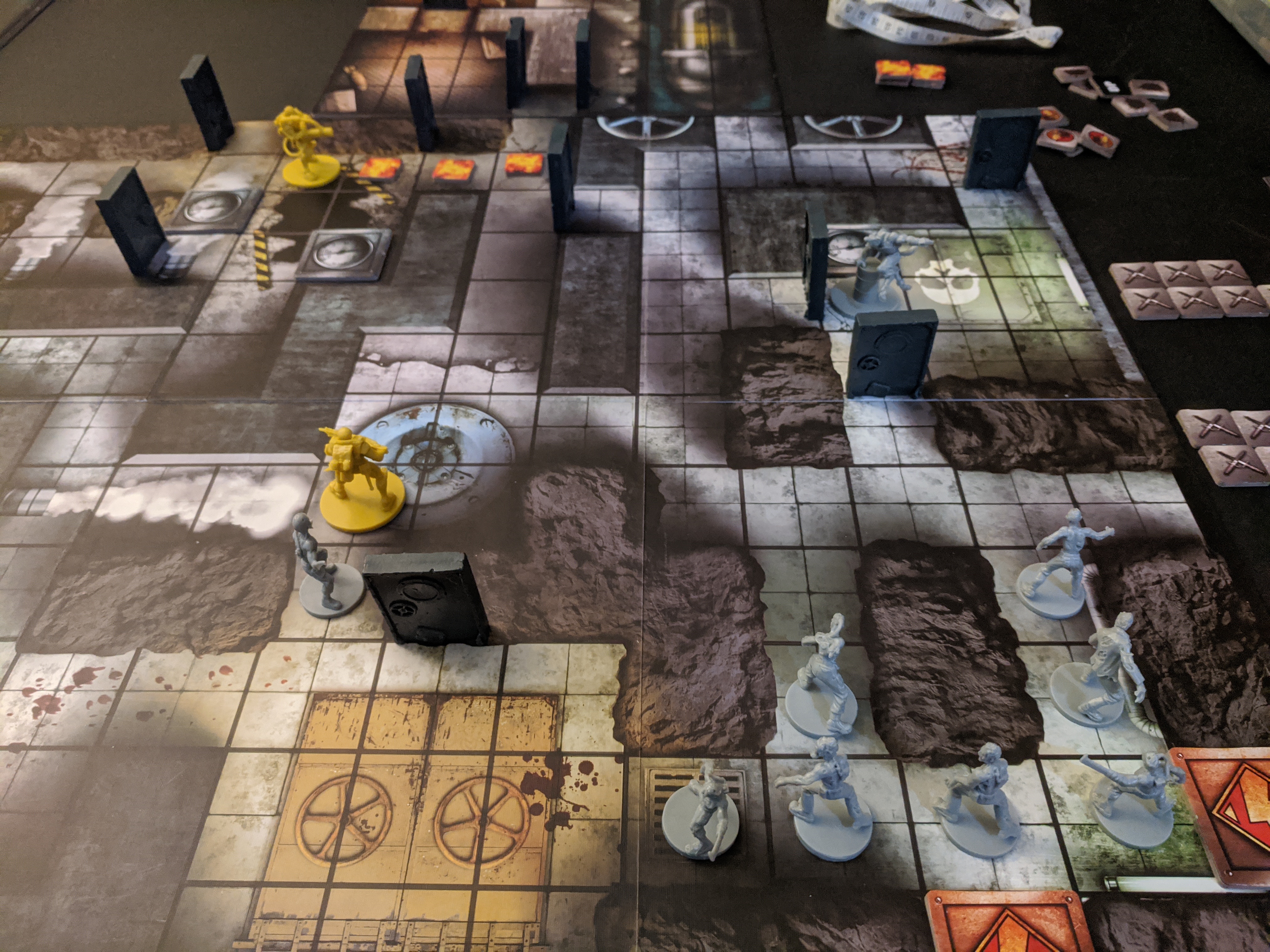 And the other Blitzhund moved in for the kill: 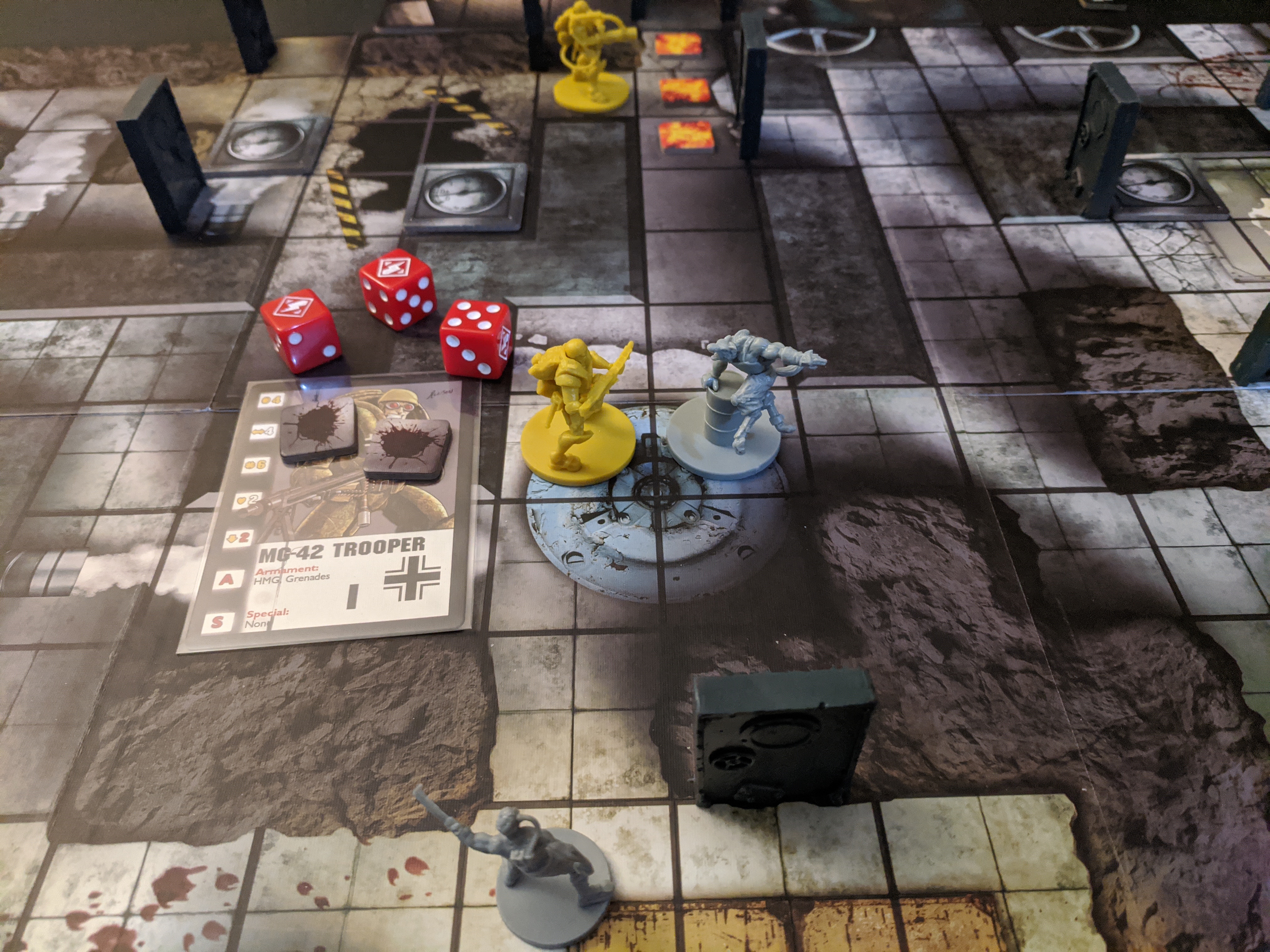 At this point, the odds were looking grim for both sides. The Drop Troopers were down to just their Flammenwefer, and the SWD were reduced to one Blitzhund and a steady stream of Sturmzombies (boosted by double Brainwurst).

That leaves only one objective scoring unit for both forces. If either player could kill the other’s unit, they would win the game!

I decided to give the Flammenwerfer a Pistol as a backup weapon while in the objective room.

The Flammenwerfer moved to the entrance of the subpen and unleashed a torrent of fire down the central corridor: 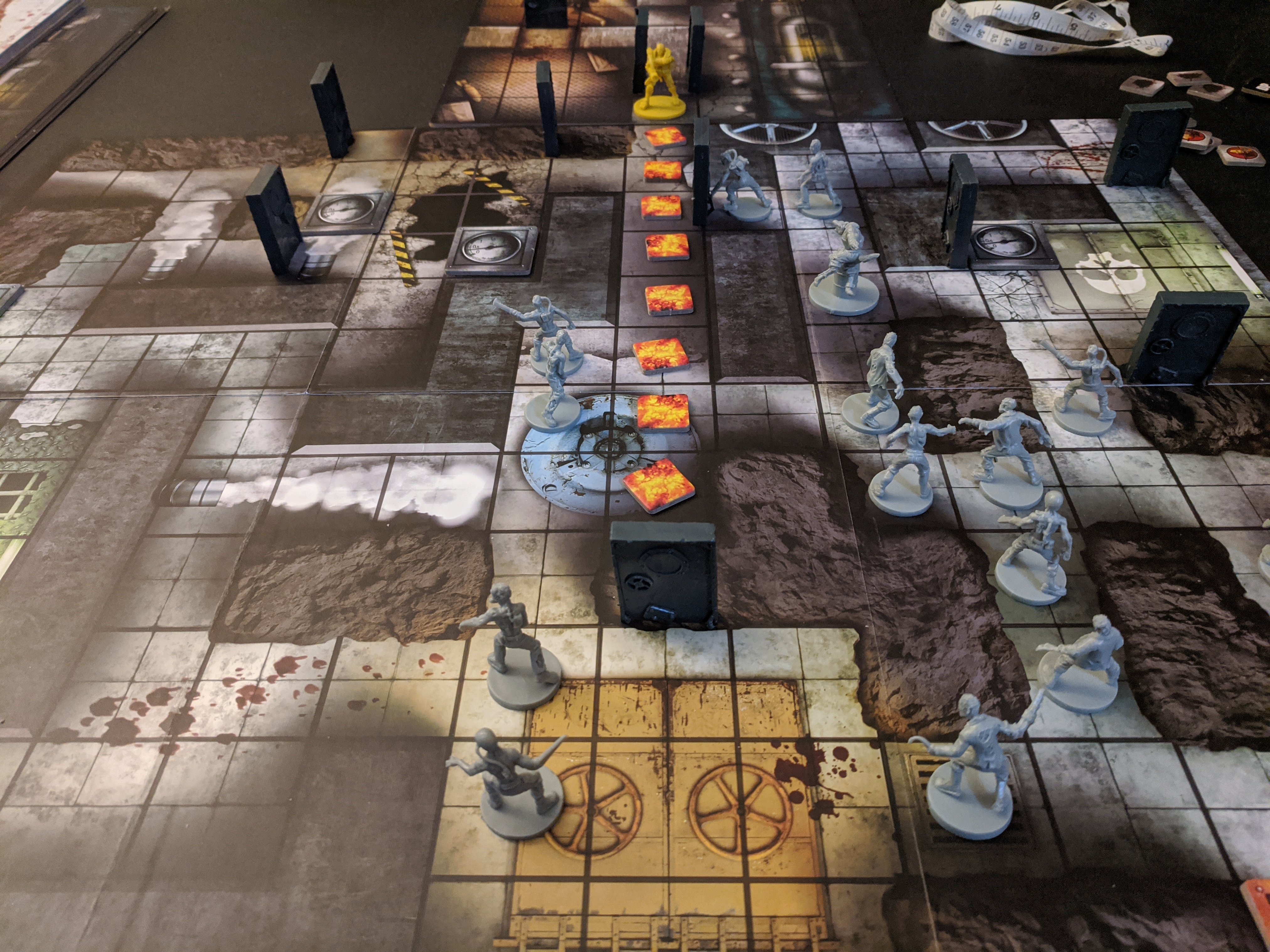 While the flames were raging, he ran to the door just outside the objective room, turned around, and unleashed another torrent of fire.

He was trying to keep the zombies out of the subpen until the last possible moment: 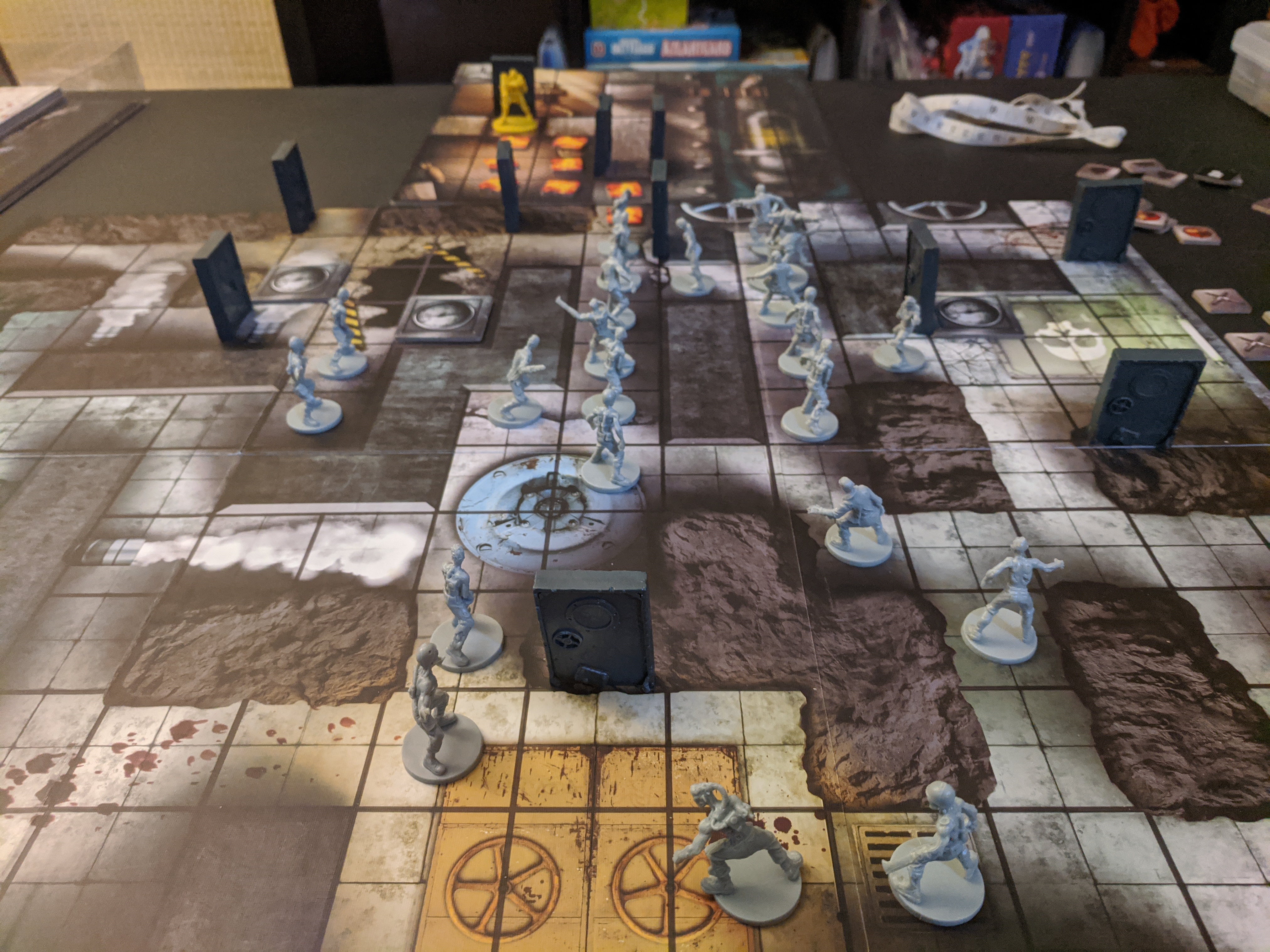 Then, with full CPs available, the Flammenwerfer sent out another firewall and then dashed up to the objective: 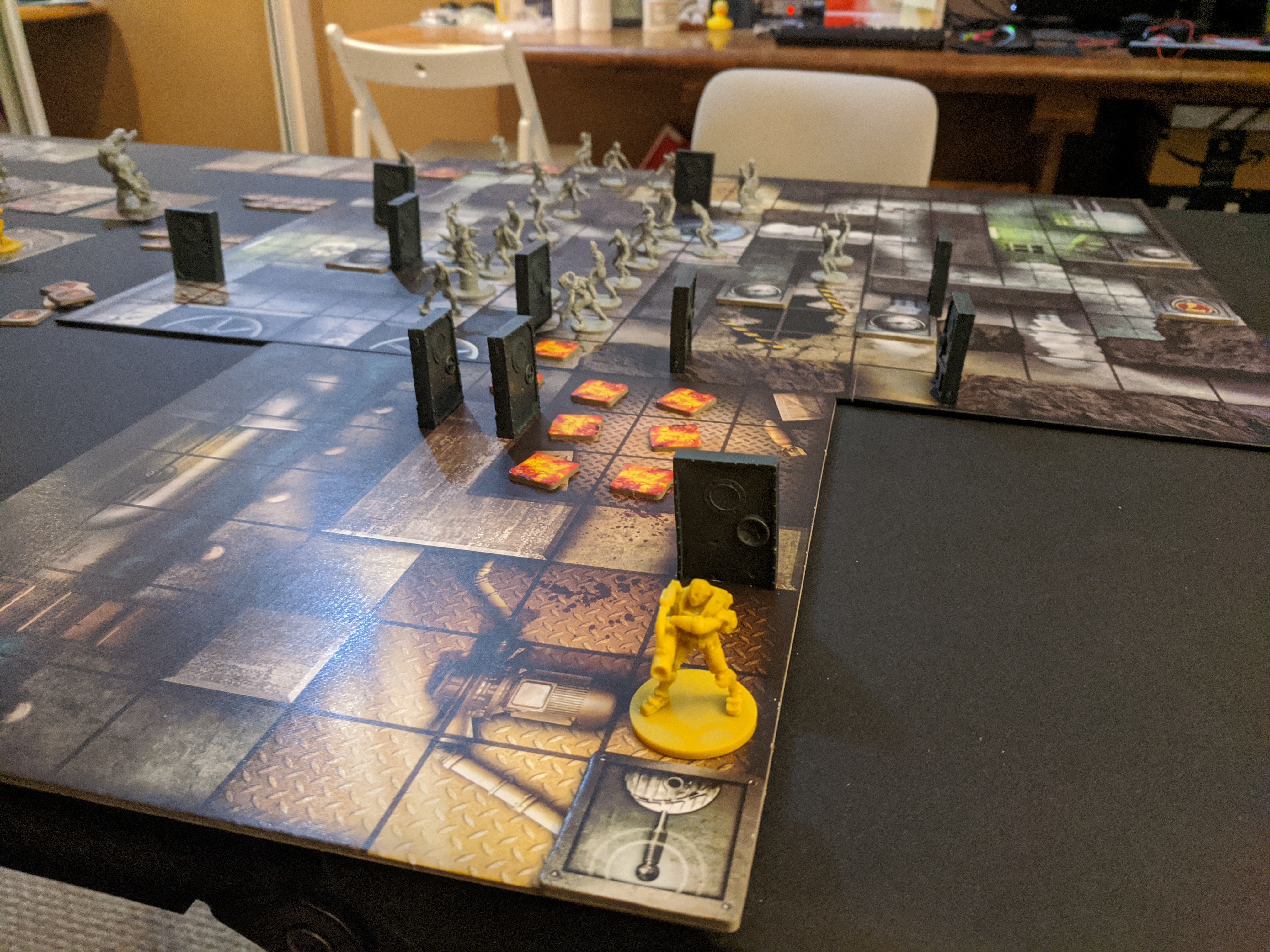 Once the fires died down, the seething mass of Sturmzombies pushed into the subpen.

The first Sturmzombie rushed into view .. BLAM .. down he goes.

Oh oh! His pistol is jammed! This is a terrible time for this to happen: 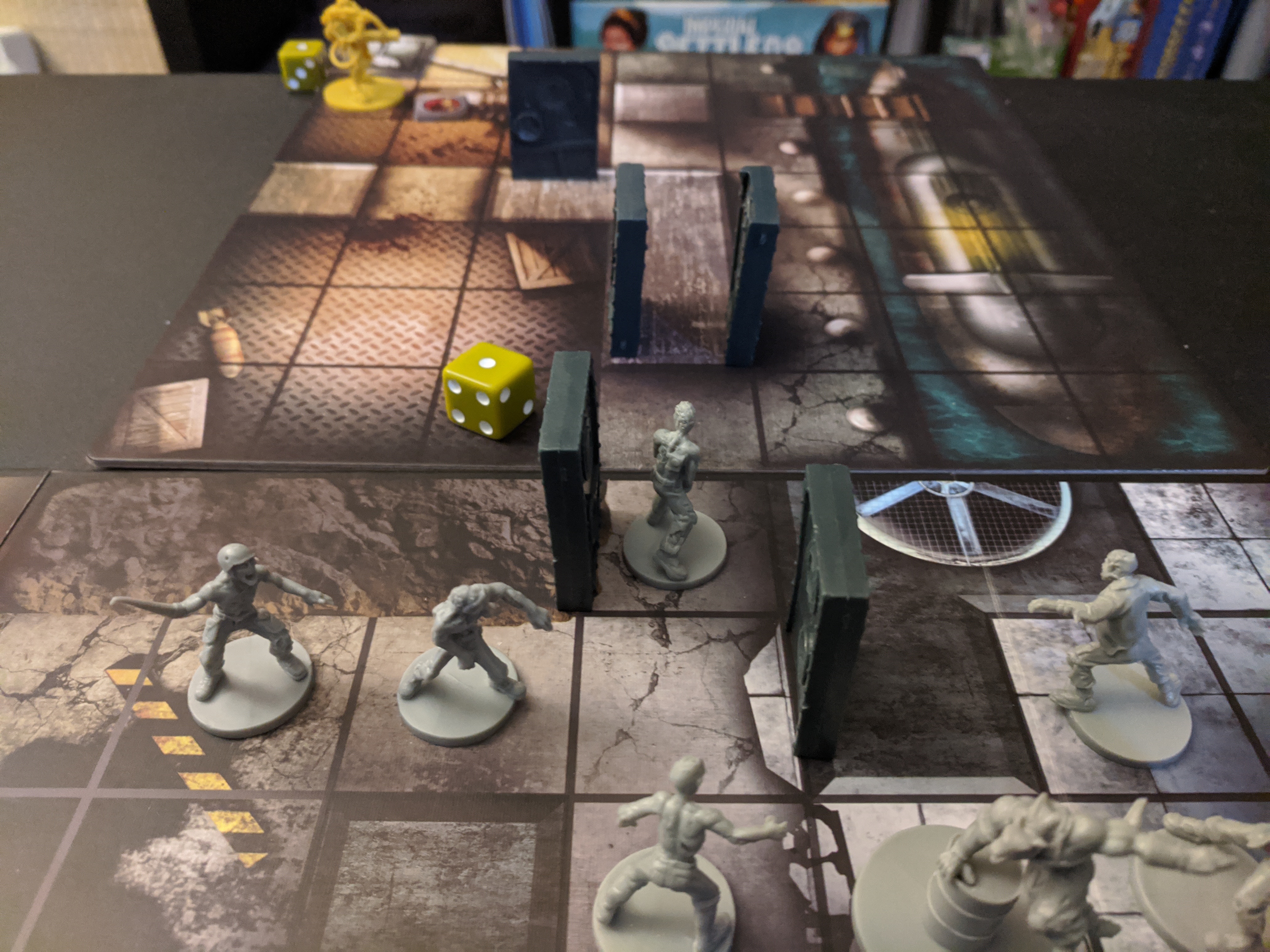 With the Flammenwefer disarmed, the Sturmzombies fill into the room adjacent to the objective room. The cunning Blitzhund also moves into position just outside the subpen. The Blitzhund is waiting just far enough away that it’s not possible for the Flammenwerfer to rush out and kill him during the next turn.

The Drop Trooper bids all CPs in order to guarantee going first.

SNAFU! … and then SNAFU back!

The SWD steal first turn, and with all their CPs remaining. This seals the fate of the game: 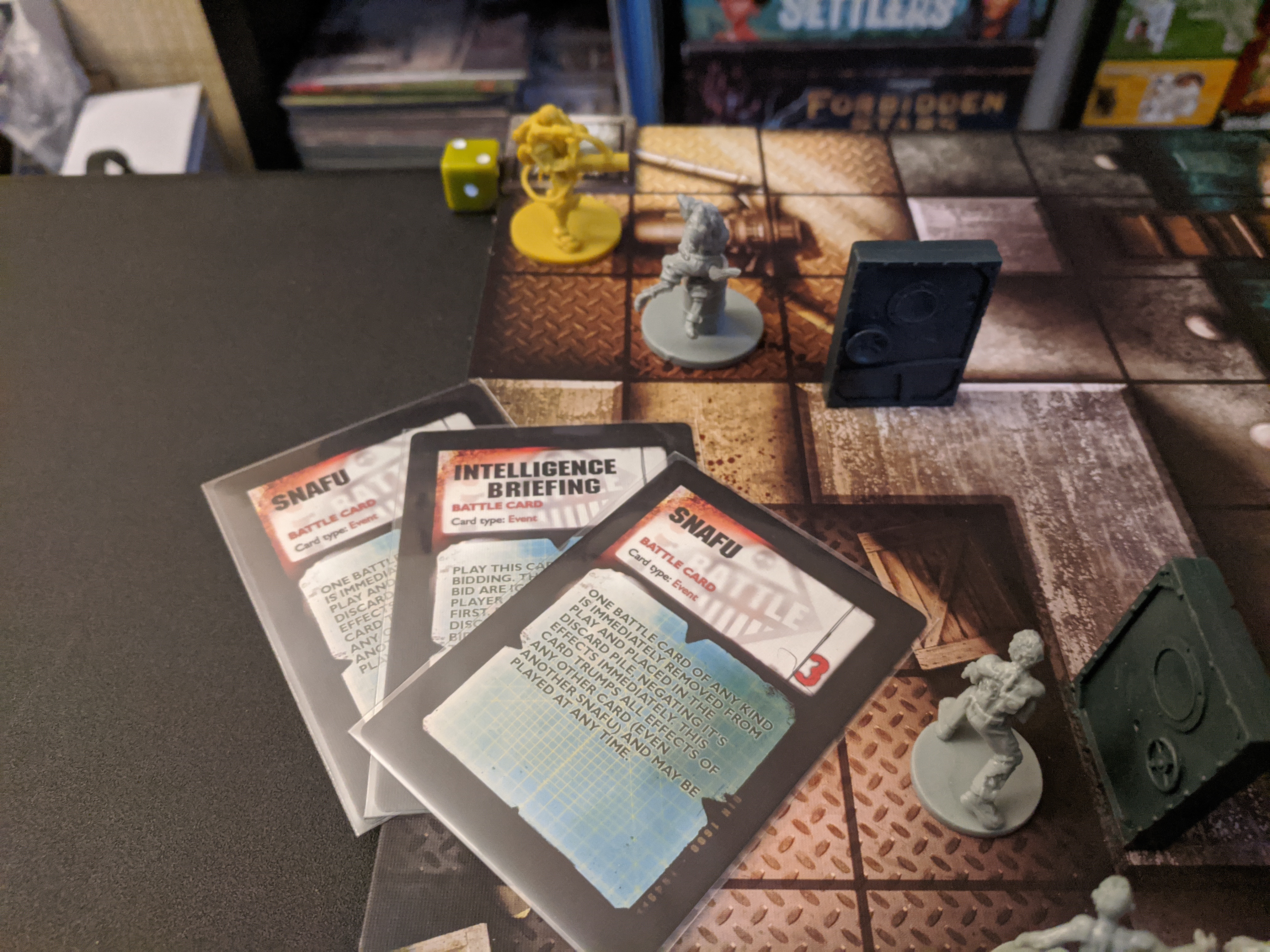 The Blitzhund leaps over several Sturmzombies to reach the Flammenwerfer and tear him to shreds: 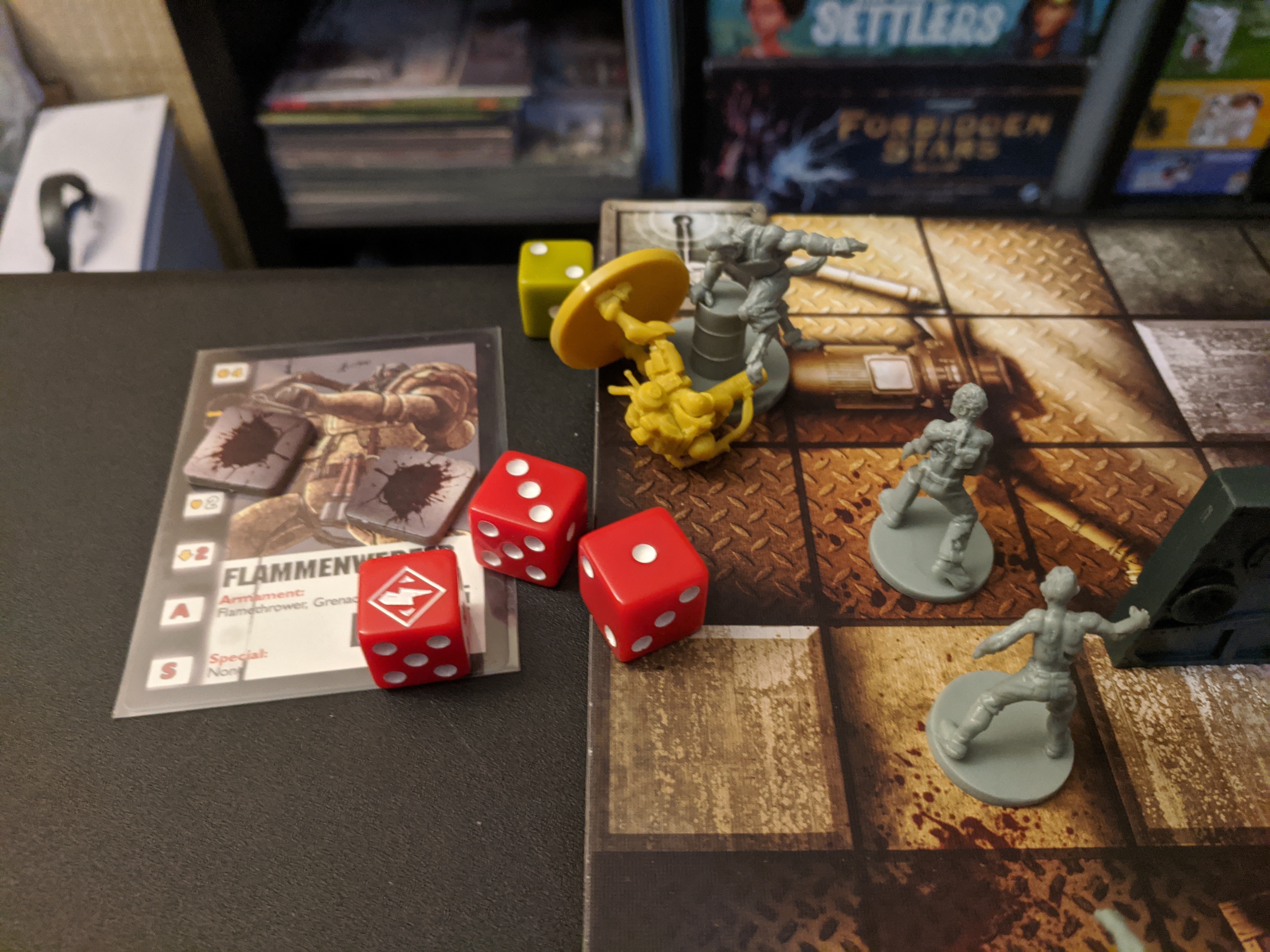